“Ch-ch-ch-changes…..Time May Change Me, but I can’t Change Time…”

Interesting start to a new post, huh?  Kinda sorta ‘Bowie-like’ but different….as you can see by the featured photo, this is going to be a comparison contrast with some history thrown in regarding the quintessential American, ‘Go-To’ rifle, the AR-15.

Let’s start out with a little known trivia fact:  Which US military branch had a fully automatic version of the M16 actually designated as the AR-15?

Drum roll:  The US Air Force. The USAF chose Colt’s Model 604 and had it designated the AR-15.  Same thing as the M16 feature image above (not A1), complete with select fire capability but with all the wonderful improvements (to that time) that Colt had made to ensure reliability in combat conditions. 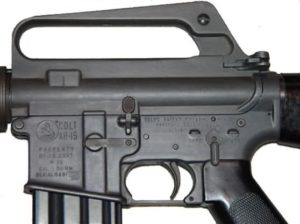 From what the records indicate, once powder issue had been resolved and fouling was no longer a killer in the field, and the buffer spring had been strengthened, the forward assist was no longer necessary.  We always thought we were being short changed with the AR-15 version, but in all the time I was in the field in swampy, wet, winter, and dry conditions, never once did my issued AR-15 fail to go into battery when firing, so apparently, Colt did fix things.  They even got rid of the three prong flash suppressor that could, but didn’t normally, get caught on local vegetation.  More often it was used to pop open ‘C Rats’ or ammo cases (the violator getting caught became miserable for a few weeks), and then, ‘poof,’ all our rifles were either retrofitted with ‘jungle tips’ (original reference by USAF Security Forces in the 70’s) properly known as ‘bird cage’ flash suppressors or returned to Depot after new ones had arrived. 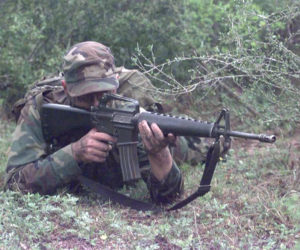 USAF Air Base Ground Defense troop with a M16

Then there’s the ‘forward assist’.  The originals on the M16A1 actually fit the thumb as opposed to the ‘push button’ type seen today.  And, it was necessary, from both a physical point of view (the buffer springs weren’t quite strong enough to deal with the crap encountered in the bush) and there was a more important psychological perspective to deal with:  way too many GI’s were afraid of having to break down their rifle because it wouldn’t go into battery during a fire fight.  Even with the problem fixed, the ‘A1’ was a good idea if only for confidence and a ‘make sure’ tool.  So now, everyone who’s anyone won’t buy a M-forgery or full length rifle without a forward assist.  Every single upper I’ve purchased has one ‘De Rigueur.’  You simply cannot find an AR lower without one (which is kind of ironic, in that buffer springs now are available that when compared to the older ones are on steroids!)  At least I haven’t been able to do so.  Basically, it’s an unnecessary feature that will never be used in earnest, which is to ensure that a gunky, muddy, debris encumbered bolt carrier group will seat so the weapon may fire.  All one needs for this rifle to be reliable is a good, strong buffer spring, and routine cleaning, and it won’t fail.  Maybe your mileage has varried/will vary, but I’m pretty confident in what my AR’s have that makes the Forward Assist obsolete.  Colt had fixed that , too, in the USAF’s AR15, and that’s why the USAF didn’t see them for quite a long time (from what I understand, current issue has them – most likely an economy of scale thing….cheaper to make them with them, than make a separate run without them).

Military problems with the AR (M-series) in Vietnam:

The powder wasn’t changed, though, until 1970, to one that was much less prone to foul the weapon to the point of despair.

The rest, as they say, is history.  I was asked on the range one day not long ago if I was using the civilian version of what I used on active duty.  My answer was something along the lines of:  “Not hardly.  This thing is a ‘space gun’ compared to what we had.”  And it’s true.  There have been so many improvements to the basic AR platform that comparison can be likened to a World War II Thunderbolt compared to a F-16 fighter.

When one compares even the improved version of the civilian model, the Colt SP-1 (the one I owned for a short time was made in 1976), is almost prehistoric compared to my 16″, Nitiride 1:8 twist, NiB Bolt & BCG, flat top, 6 position Magpul stock, Gisele trigger, Primary Amrs optic mounted, 62gr shooting, MOA capable/performing (depending on the ammo…) carbine.  Not. The. Same. Animal.

I like the SP-1 a lot, generally for nostalgia, and if I find another example reasonably priced, will buy it again.  It shoots well, and is a great collector’s piece as most are still in great shape and made by “Colt Patented Firearms”, while sporting the ‘prancing pony’ logo.  If there wasn’t anything else for me to grab, I’d take one and have confidence in its performance within its limitations.  On the other hand, if I have my ‘druthers on grabbing something for a problem, I’m reaching for my modern carbine that has every possible improvement to the platform in the way of reliability, accuracy, and durability.  No question.

Next installment:  Comparison of the current practical combat carbine.