In the last post on Magnetic Declination, the impact it has on azimuth/bearing accuracy was described.  In this post, we’re going to look at the ‘how and why’ of converting grid (or map) azimuths/bearings to magnetic azimuths/bearings and vice versa.

First, a word about grid maps.  They’re not essential for ‘shooting’ an azimuth or bearing (from here on out referred to as either a Grid Azimuth (GAZ) or Magnetic Azimuth (MAZ)), but they are essential to plotting (determining & marking) positions on a map to within various levels of accuracy (meaning actual distance from the object or location being plotted).  That’ll be covered in one of the next posts on this subject.

For your convenience, you can use a ‘UTM’ ‘Universal Transverse Mercator’ AKA USGS 7.5 minute map.  They’ll either have ‘tick’ marks on them that you can use to provide your own grid (as I have done and commenters have suggested (Tip:  Use very thin map marking pens and don’t use red ink – red disappears when using a red light) or complete grid lines.  They’re ok to use; they’re typically in 1:24,000 scale, and you need to ensure your map tools correspond in scale.  More on that in the future.  Personally, I prefer and recommend maps that use the MGRS (Military Grid Reference System) which is similar to the UTM, but scaled in 1:25,000 & 1:50,000, which is what I learned land navigation with during active duty.  It’s a familiarity thing for me.  YMMV.  In either case, the listed Declination, or ‘GM Angle’ on the map (which may or may not be correct due to Magnetic North Pole movement) is for the center of the map, and depending on the what’s under or on top of the surface, the Declination degree may be distorted during your trip.  So, it’s good to check the on line or other sources for up to the date declination numbers.

The simplest way available to man right now is to get a compass that has an declination adjustable feature, such as the Sunnto MC-3 as pictured below.  Basically, once you determine what your Magnetic Declination is, you simply use the provided tool, adjust the declination reading to correspond with that number (either East or West) and use your compass on the map as well as when shooting your azimuth.  No mathematical equation is necessary because the compass itself has the declination already accounted for by your adjustment.  In the compass image below, you can see the declination window at 6 o’clock on the compass, or specifically, at Zero degrees.  It’s the little black pincer looking thing.  Underneath the compass is a small standard screw slot that an accompanying tool will adjust to whatever your declination is, East or West.  Once the degree is in the center of the indicator, you’re set.  None of your azimuths need conversion until such time as you use a different compass – one that can’t be adjusted similarly. 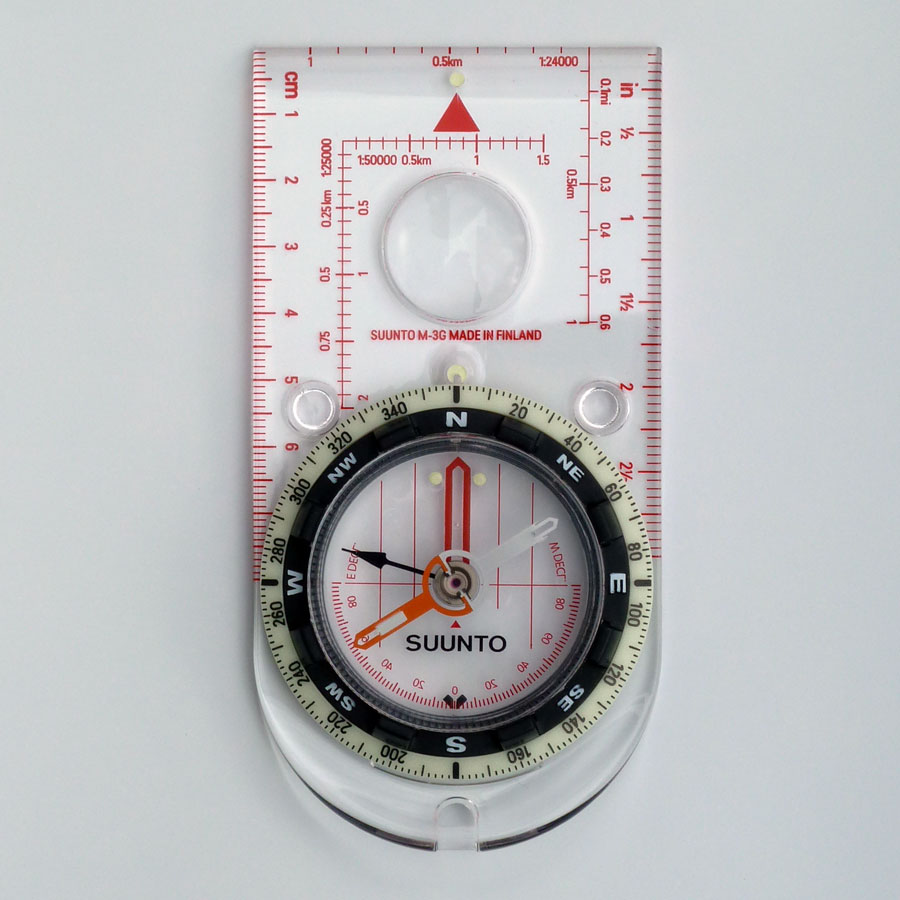 If you’re not using that type of compass, you’ll always have to use the mathematical equation to convert both Grid and Magnetic Azimuths back and forth when navigating.

When you’re figuring out the azimuth to get from your start point to a mid or end point on your course, you really need one of these things to determine your GAZ.

It’s called a ‘protractor’ and using it is pretty simple:  Place the center over the point on the map you’re using to determine which azimuth you’re going to travel on, square the protractor to the map’s grid, place a small tick mark in the center of the protractor (they usually have a hole for that purpose), and use some sort of straight edge to line up the center point and the azimuth (use the INNER RING of degrees, not the outer ring), place a tick mark, move the protractor out of the way, and draw a straight line from the origin point to the azimuth line.   You should have written down your Grid Azimuth (GAZ).

Now on to GAZ to MAZ conversion. 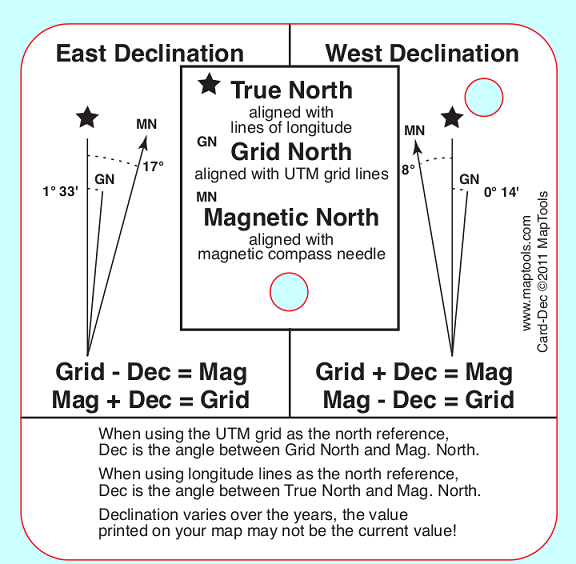 If you plot your grid azimuth on a map and it reads (for example), 180 degrees (GAZ), and you know your local declination is 15 degrees East, and you wish to convert your GAZ to a MAZ, simply subtract the Declination of 15 degrees and you’ll have a 165 MAZ, or ‘magnetic’ azimuth that you can use with your compass.

Now, if you want to convert a MAZ to GAZ using the example above (in that you have a MAZ of 180, simply add the 15 degrees declination to the 180, and you have a correct GAZ.

This equation must be memorized if you don’t have a declination adjustable compass in order to stay accurate and end up on or near the coordinate you’re aiming for on the last leg of your navigation.  The consequence of not converting or adjusting for declination is not reaching your objective…..or worse, getting hopelessly lost, which might be terminal, depending on your location and the scenario you find yourself in.

And really, that’s all there is to it.

Next time:  Plotting Coordinates – Why and How