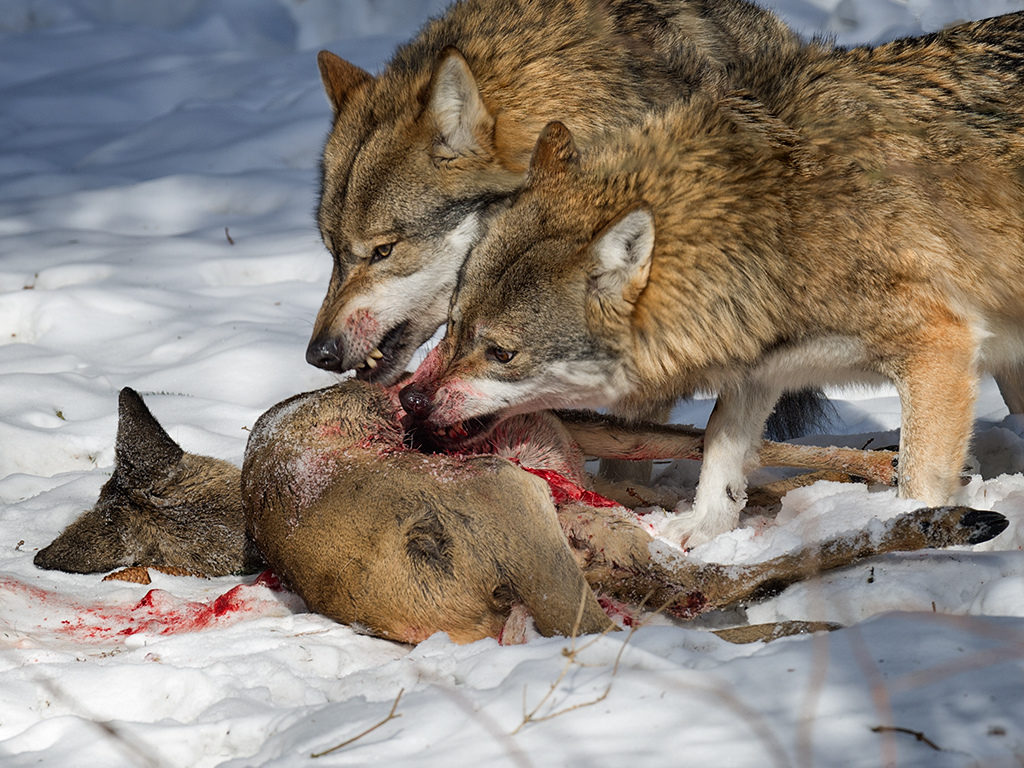 If this was your or one of your kids doe, these two would do whatever they thought it took to keep you away to include                attacking you.  And then comes the question:  Where are the other pack members?  Are they surrounding and flanking you?

I do a lot of hunting in wolf and bear country and the season I hunt in doesn’t have the bears fully hibernating yet, and the wolves, well, they’re ALWAYS out there looking for kills to claim during deer season.  In fact, in the last 3 years in my hunting area, we’ve spotted more wolves just before and during deer season than any other time of the year.  Wolves are smart – have they learned that the humans’ ‘bang stick’ provides fresh kills they can steal from humans by intimidation?  Possibly.  I’m no scientist, just guessing here, but the fact is, we see more wolf sign and wolves near our trails and stands during deer season than any other time. And…wolves are pack animals.  They hunt and fight as a unit.  They have a rank structure, leaders, and really aren’t a species one might want to say, be coy with. 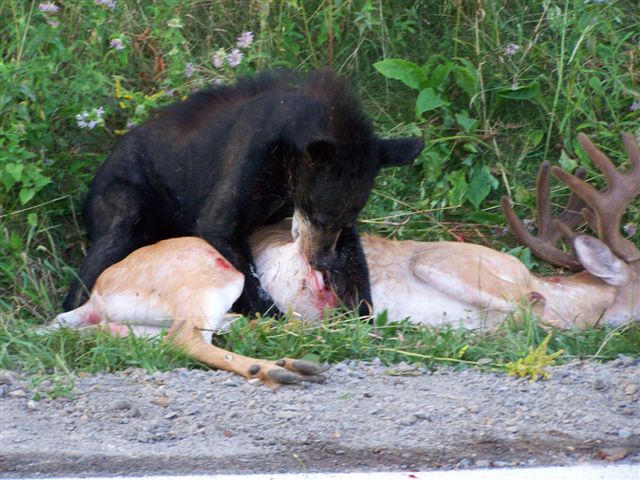 So, that said, most, if not all of our hunting party, and many people we run into in town or wherever are sporting .44 magnum revolvers.  Some sport .357’s, but by and large it’s a .44 magnum used for self-defense.  Not too many .44 magnum pistols seen as they’re really pricey, but they’re not unknown.  Personally, I’ve grown to like the idea of a semi-auto .44 magnum pistol, and will be trying out my Desert Eagle this year.

By the by, everyone is aware that black bears do attack without warning, right?  There’s a belief out there that bears don’t like humans and will avoid them if possible.  The facts don’t bear (pun intended) that out.  Take the pic below – If that was me in the pic, I’d have either one of my .44’s out and trained on that bear’s skull.  Period.  Then I’d let him get about 3 feet closer and then defend myself.  Bears are not to be trifled with, nor should they be underestimated.

I’m sure you’ve read the old joke about people asking park rangers what to do about bears.  The rangers told them to have pepper spray and wear bells on their clothes.  The bears would hear the bells and give them a wide berth, but if not, the pepper spray would dissuade the bears from attacking.  The people asked the park rangers when they would know they were in bear country.  The rangers told them, “You’ll see piles of bear scat that has bells in it and smells like pepper…”

Personally, I prefer a good .44 magnum. 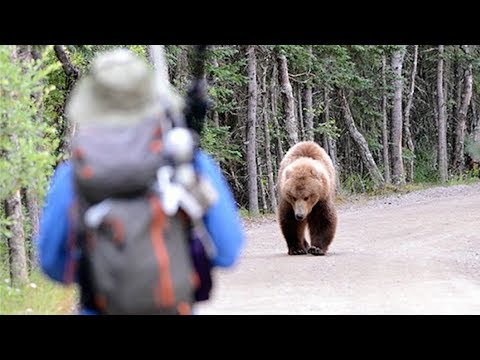 I’ve got a back up S&W 686 with a 6 inch barrel for back up, but nothing makes me feel more secure than having a .44 magnum revolver/pistol strapped to me when I’m in wilderness, especially if I’m by myself.

My self-defense revolver that is my current ‘go to’ for a survival scenario is a ported S&W Model 629-2 with an 8 and 3/8th’s inch barrel.  As Smiths typically prove to be, it’s very accurate and easy to shoot, even with the long barrel (maybe I should say, “especially with the long barrel….balance & sight radius).  I carry 305gr HSN hard cast Bear rounds in it with four speed loaders in my jacket pockets.  Might seem overkill to some, but I don’t complain about having 30 rounds of survival artillery for unwanted predators who decide I might taste good.

The reason I described the Smith as my ‘current go to’ is because I just came into a Desert Eagle XIX in .50AE, and have a .44 Magnum barrel assembly ordered and on the way.   Once I get it converted (a matter of seconds with the DE) to .44 Magnum, it’ll be off to the range to see how it handles and groups against it’s competition – my 629.   The 629, with irons, groups nicely at about 3 inches or so at 25 yards.  Again, that long sight radius helps considerably; the recoil is very manageable, especially as it’s ported, allowing for fairly quick follow up shots if necessary.

As .44 magnum ammunition goes, for range work and basic putzing around during work or fun weekends at the hunting property, I load with Federal American Eagle 240gr JHP.  It’s reasonably priced, pretty much always available, and performs pretty well.  It’s not a ‘superb’ loading, but it serves well.  It’s also a recommended round for the Desert Eagle .44 magnum by IMI/Magnum Research.  So, that gives me some peace of mind as well.

So, onto having either one of these as a survival weapon (and not to discount also having, say, a .22 side arm for taking small game, too).

Let’s do the negatives first:

Here’s what I see as the positives – YMMV:

What have you chosen, or would choose for, ‘Survival Artillery’?